Heba Y. Amin is an Egyptian visual artist, researcher and lecturer. She is currently teaching at Bard College Berlin, is a BGSMCS doctorate fellow at Freie Universität, and a recent resident artist at the Bethanien artist residency program in Berlin. Amin has received many grants, including the DAAD grant and the Rhizome Commissions grant. She is the co-founder of the Black Athena Collective, the curator of visual art for the MIZNA journal (US), and curator for the biennial residency program DEFAULT with Random Association (IT). Furthermore, Amin is also one of the artists behind the subversive graffiti action on the set of the television series “Homeland” which received worldwide media attention.

Heba Amin’s work is embedded in extensive research and a studio practice that looks at the convergence of politics, technology, and architecture. Working with various media, her work investigates the impact of infrastructure on the human psyche through junctures, glitches and flawed memory. Her work highlights and engages with narratives of national sovereignty, often in contested territories and especially questions methodological assumptions embedded within Western historiography. She is particularly interested in tactics of subversion and other techniques used to undermine systems as well as topics surrounding critical spatial practice.

In her recent projects she has addressed the politics of landscape, using measuring and surveillance tools to place contemporary stories of migration in a context of technological advancement and urban development. Through her work she puts modern migration in the wider historical context of landscapes that have witnessed centuries of migratory paths. Her work is “a response to this kind of exoticization and gourmandizing, such a reclamation of the physical and psychological territory of the region is inherently a political as well as an aesthetic act. One could even regard it as a kind of sociocultural audit: using the tools of science to reveal the presence of subjectivity itself,”[1]

Amin is currently represented by Zilberman Gallery in Istanbul and Berlin. 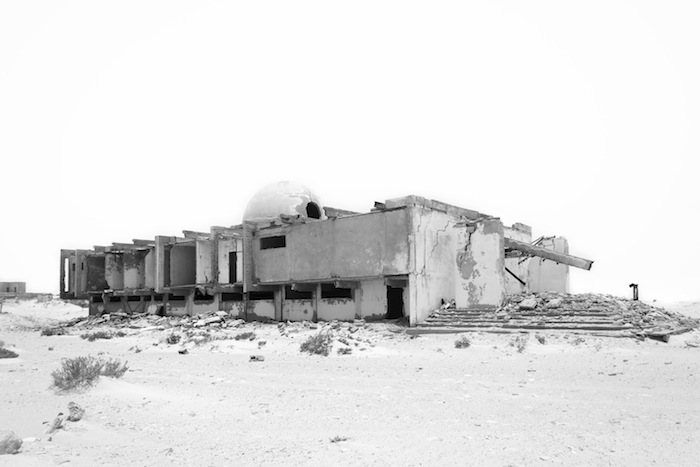 An Astronomical Determination of the Distance Between Two Cities, 2016, Courtesy the artist